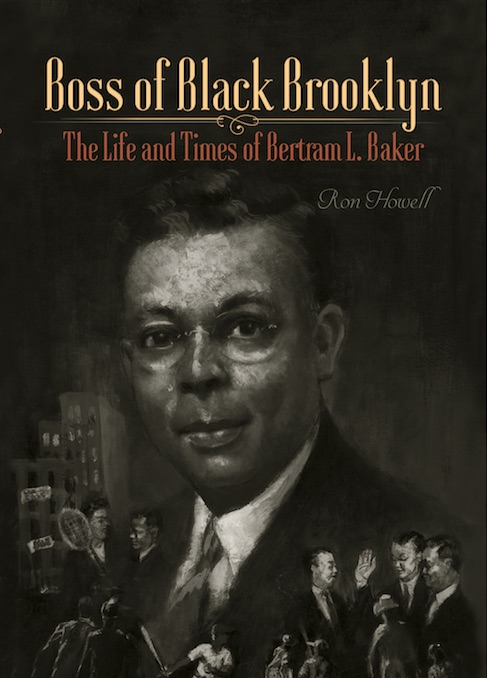 Boss of Black Brooklyn: The Life and Times of Bertram L. Baker

Boss of Black Brooklyn presents a riveting story about the struggles and achievements of the first black person to hold public office in Brooklyn. Bertram L. Baker immigrated to the United States from the Caribbean island of Nevis in 1915. Three decades later, he would be elected to the New York State Legislature, representing the Bedford Stuyvesant section. A pioneer and a giant, Baker’s story is finally revealed in intimate detail by his grandson, Ron Howell.

Baker loved telling his fellow legislators that only one other Nevisian had ever served in the State Assembly. That was Alexander Hamilton, the Founding Father. Baker’s impact was deep and wide.

Baker wrote one of the nation’s first laws barring racial discrimination in the sale or renting of housing. From 1936 to 1966, he led the all-black American Tennis Association, as its Executive Secretary. In that capacity he negotiated with white tennis administrators, getting them to accept Althea Gibson into their competitions. Gibson then made history as the first black tennis champion.

Boss of Black Brooklyn explores themes that still resonate in black lives: fatherhood, relations between men and black women, and faithfulness to ancestry.

Ron Howell is a journalist who has written extensively about the Caribbean, Latin America, and New York City. He is an Associate Professor of Journalism at Brooklyn College and author of One Hundred Jobs: A Panorama of Work in the American City.

“Bertram L. Baker could not have had a better biographer than Ron Howell, a gifted journalist and truth seeker. Howell’s mesmerizing description of his grandfather’s life and career also paints an indispensable portrait of an entire borough, city, and nation. Following in the footsteps of another politician from Nevis—Founding Father Alexander Hamilton—Bertram L. Baker was a pioneer whose untold personal and political story is brilliantly depicted by a virtuoso and gifted writer who is well suited to revive him for all of us.”

“Bertram Baker was a pioneer we must never forget. His voice still speaks to us from the first decades of black political power in New York City. He was a model in the New York State legislature for many of us who later went on to historic achievements of our own in New York City politics.

“I followed Bert Baker into the State Legislature, as did Charlie Rangel, who became the most significant black Congressman New York City ever sent to Washington; and as did Percy Sutton, who preceded me as Manhattan Borough President; and as did Basil Paterson, who joined with Bert Baker in the 1960s to make the voices of Harlem and Bedford Stuyvesant residents heard throughout the city. Basil Paterson later became the first black Secretary of the State of New York. We were all youngsters when Bert Baker entered the political arena, and we all stood on his shoulders.

“I have no doubt that when I became New York City’s first black mayor in 1990, Bertram Baker was smiling with satisfaction from heaven. I am certain that Bert Baker is still watching, and we still have much to accomplish.”

“Through his powerful rendering of one irascible and determined political boss, from first hurrah to last, Ron Howell uncovers the untold history of America’s largest black community. It’s a deeply researched story of strivers and failures, high hopes and backroom deals, of fighting racism and working the system. But most of all, it’s a song of love: for Brooklyn, for its people, and especially for the author’s gruff grandfather, his ‘Daddy B.’—the Hon. Bertram Baker, ‘the Chief.’”

A Day in Black Brooklyn History

The Boss (Now Long Deceased) Reflects on His Feat

Baker was also the Boss of Black Tennis

Last of the Bigtime Bosses

Fatherhood as a Cross Generational Theme

The Island of Nevis is in the Limelight